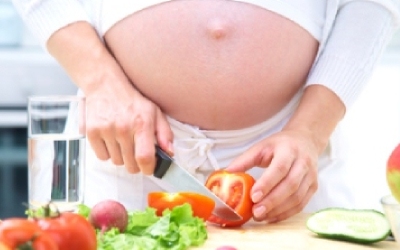 Healthy eating is one of those wellness goals you always aim to get around to, but never quite manage. However, pregnancy kind of forces your hand, and now you have to look after your wellbeing – and your baby’s – with the right foods. If you’re freaking out right now about what you should eat, follow our experts’ guidelines for a healthy pregnancy diet.

1. Fortify with Folate: ‘The same folic acid that prenatal vitamins are filled with also comes in foods rich in folate,’ wellness expert Kate Rope explains. ‘The B vitamin occurs naturally in many foods including lentils, pinto and black beans, edamame, spinach, asparagus, citrus fruits and juices. Other foods are fortified with folate to increase the levels women eat and reduce their chance of having a baby with a birth defect. Enriched choices include cereals, bread, pasta, and flour (look for the word “enriched” or “fortified” on the label).’

2. Eat Your Iron: ‘If you eat meat, it’s easy,’ notes Rope. ‘There are 3.5 milligrams in 6 ounces of sirloin steak and 2 milligrams in a 6-ounce chicken breast. Eggs are another terrific source for meat eaters and vegetarians. But there are also plenty of vegetables filled with iron such as spinach, Swiss chard, beans, lentils, and apricots. The only catch for vegetarians and vegans is that the body does not absorb the iron from vegetables and fruits (called non-heme iron) as easily as that from animal products, so you need to help your body make the most of it. Eating an iron-rich piece of produce along with a good source of vitamin C will help you absorb more iron. Squeeze a little lemon juice on your steamed spinach or into your lentil soup or add some sliced red peppers to a spinach salad. Finally, fortified cereal, which is also rich in iron, is a good shortcut to getting your daily fill.’

3. Sober Up: Carl P. Weiner, MD, professor and chair of obstetrics and gynaecology at the University of Kansas School of Medicine in Kansas City and co-author of The Complete Guide to Medications During Pregnancy and Breast-feeding, warns, ‘Alcohol is a recognised cause of birth defects and one of the most common causes of mental retardation. Though low consumption, for instance a 6-ounce glass of wine every other day, is safe for most women, in some it is enough to injure the foetus…The safest approach is to avoid alcohol completely during pregnancy.’

4. Cut Down on Caffeine: ‘Caffeine has been intensively studied,’ says Dr. Weiner. ‘And although there has been harm discovered with extreme consumption, moderate amounts are fine. A cup of coffee or a cola product every six to eight hours is probably safe.’ Rope adds, ‘Caffeine can, in rare instances, cause an irregular foetal heart rate, but your consumption would need to be very high, and the problem is not life-threatening and can be treated by stopping the caffeine intake. ACOG [American Congress of Obstetricians and Gynecologists] concluded that less than 200 milligrams daily (one to two cups of coffee or three caffeinated sodas) does not raise health risks in pregnancy.’

5. Don’t Eat for Two: Dr. Weiner asserts, ‘The biggest mistake a pregnant woman can make in her diet is to assume she is eating for two or use her pregnancy as an excuse for a binge.’ Rope explains, ‘Gaining too much weight in pregnancy can have an adverse effect on a baby by increasing his or her lifelong risk of obesity, heart disease, and diabetes. In fact pregnant women only need 300 extra calories daily (a cup of milk and a half sandwich).’

Could Leafy Vegetables Be Making Your Family Ill?

Great Recipes for Kids Who Just Won’t Eat their Breakfast